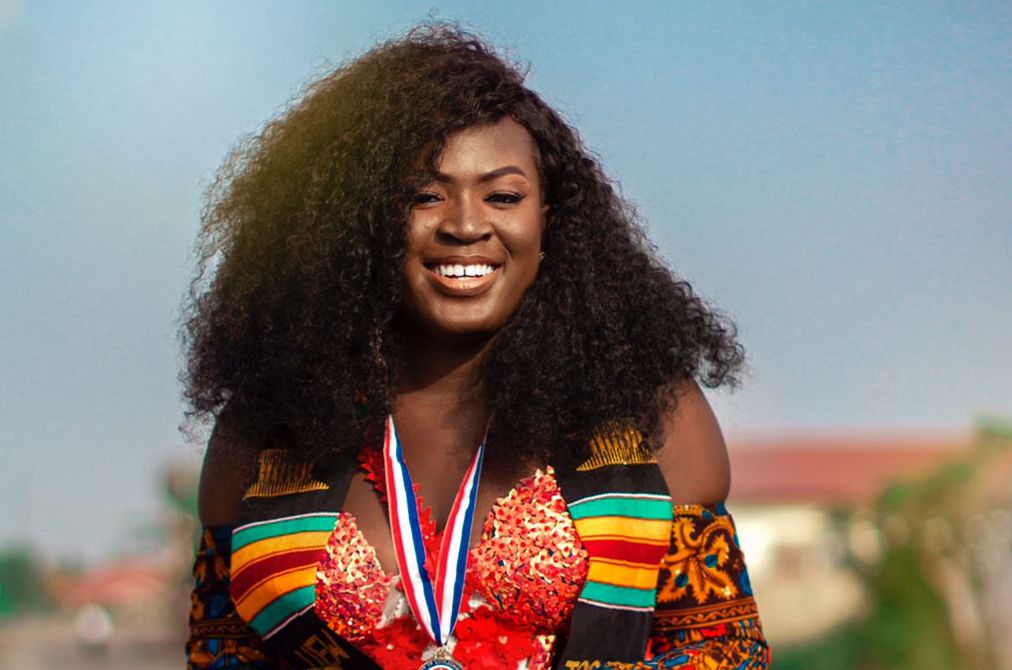 According to Jackie, self esteem and determination is key for anyone who wants to climb the ladder of success and one can only do that by believing in herself.

She shares with SheHub.tv that although she is currently recognised in Ghana as one of the few outstanding YouTube content creators, the road was not all roses.

“I’m ambitious and driven, I thrive on challenges and constantly set goals for myself, so that I always have something to strive towards. Never a dull moment in my life. I’m always looking for an opportunity to do better and achieve greatness. I’m passionate about my work because I love what I do and I have a steady source of motivation that drives me to do my best.”

Brought up by her father, Jackie opens up on her early childhood and educational journey.

“I was born in Kwahu in the Eastern Region of Ghana. I didn’t grow up there though since I grew up in Kumasi (a capital city of one of the busiest regions in Ghana). Had my early education at Christian Academy in Kwahu at Abetifi and continued from class four till I completed Junior High School (JHS) at John William Montessori School in Kumasi.  Continued to Yaa Asantewaa Girls Senior High School (One of the oldest and renowned Girls Schools in Ghana),” she says.

According to her, taking on several leadership roles while a student was instrumental to where she is today.

“I was part of the School Editorial Board and I was the Day Prefect during my time. After Senior High School (SHS), I learned bead making and jewellery for some months and was involved in that business for a while before coming to the university.”
Jackie says when she first contemplated becoming a content creator, people did not take her seriously, but she believed in what she was setting out to do and was determined to excel:

“…Before I started all that I’m doing now, I literally had no idea about media, photography, and event emceeing. So when it all started from scratch, a lot of people thought I was joking and just seeking attention and I had a lot of naysaying. But I told myself this is what I want and this is what makes me.

“I’m happy because I just started learning everything on my own without the help of anyone. I did research and whenever I got stuck that’s when I’d ask questions. [Doing] all this alone motivated me to be the best. And also growing up, seeing women in the field of photography and media seemed like something far out of reach so I tried to bridge that gap myself by becoming more than I could even think of.”

When asked about what made her believe that becoming a content creator was the right path for her Jackie says her creative aspect manifested when she quit radio and wanted a way to reconnect with her fans who used to listen to her on radio: “Then that was when I resorted to YouTube. I was on YouTube already since 2016 but wasn’t really consistent then and was just posting there for fun. Asked about whether she felt she was stepping out on faith with becoming a content creator, she says, “Not at all, I feel it’s something that has always been there but it took a leap of faith to figure that out.”

Jackie shares a lack of support nearly deterred her dream.

“Yes from the onset, I wasn’t getting that much support from people. Most people didn’t understand what I was doing, so the support wasn’t there at all. But that never stopped me.”

“It feels great and I’m honoured, but most of the time I feel there is the demand for people expecting more from me and I promise to do more because a lot of people are really looking up to me.”

She continues: “Basically my future plans is to be the best I could ever be, to be one of the best communicators out there and to see myself thriving in my YouTube and event emceeing.

Jackie shares what her journey so far has taught her.

“To the person reading this, always remember that people won’t always support you but know that your biggest support in your life is yourself. Learn to validate yourself before you go out there seeking validation.”
Check out Jackie’s YouTube channel  or follow her on Instagram.