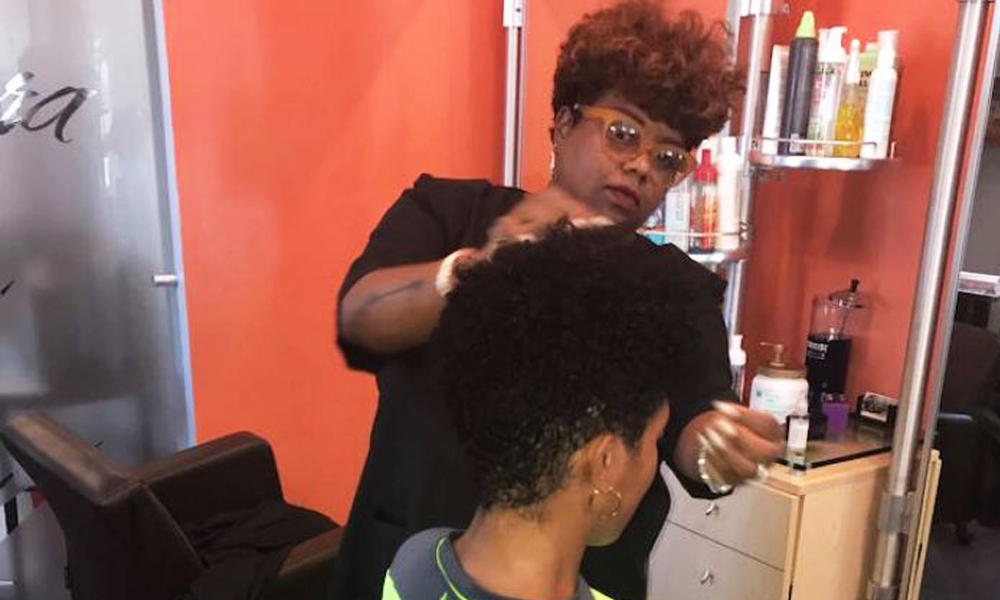 When most children say they want to be a (insert your childhood dream occupation here) when they grow up, we all know it changes a few times before they decide what’s a good fit.

When most children say they want to be a (insert your childhood dream occupation here) when they grow up, we all know it changes a few times before they decide what’s a good fit.

But that has never been the case for Precious  Brown, who says she was sure from a young girl that there was only one thing that she wanted to do—become a hairdresser.

“I’ve been doing this for 26 plus years. There was nothing else I wanted to do. I graduated from high school that June and the August I left for hairdressing school. By December the same year I was finished and my career began.”

Precious recalls she was frequently called on while at school because of her natural talent.

“They were always seeking my intput. You would have thought that I was the teacher,” she says with a laugh.

Precious began her career at Pauline’s Hair Salon. Now known as one of the best stylists in Bermuda for natural hair (she recently won the Best of Bermuda Award for Barbering & Short Hair), the mother of two says she could often be found barbering in her grandmother’s Pembroke home.

“I used to cut so many heads in her kitchen. And when I was an assistant, guys would ask me to do things to their hair. Many of them are still my clients to this day.

“That’s where it all really started off, but I think that I am an all-rounder when it comes to hair. People think that I only do short hair but I do long hair too. I do everything. I am a stylist.”

While she says loves creating new hairstyles for her natural clients, the veteran emphasises that she is always honest with them about the capabilities of their hair: “Most people who want their hair curly come with a picture in mind that’s usually not normally their hair texture and that’s what people have to realise–you have to work with your hair texture.

“You have to understand what your hair texture can do and how to manipulate it with certain products but a stylist needs to be honest and say, ‘that can’t work’.

“I am going to tell them, ‘I can’t make your hair curly like hers so the person has to realise that they their hair may have certain limitations or I may have to use perm or texturiser or else it just won’t work.”

“My goal is always to show them what their hair can do and to lead them in the right direction as far as products that will best suit them.”

And that, Precious admits, is not always an easy task: “There are so many products on the market which are hit and miss. One person is going to tell you this is what works for their hair but it may not work on your hair. If your hair texture is curly, for example, practically everything will work on your hair, so people need to learn what a product will do for their hair.”

She adds that the desire for women to have ‘pretty hair’ starts from young: “It’s embedded in us that ‘pretty’ hair is the better hair, but what I am now seeing that some of the children who had that texture hair are now adults with no hair. Their hair is thin.

“We need to stop giving children that ideal, including boys who favour girls with a certain hair texture, so by the time they are adults it’s not anything to talk about.”

Precious also weighs in on weaves: “They play a big role in a lot of women’s hairstyles, and I see nothing unnatural about that. People criticise women who wear weaves but why does it seem like the only time that it is acceptable without question is when someone has an illness? All women want to do is change their look and I see nothing wrong with that.”

Related Topics:
Up Next