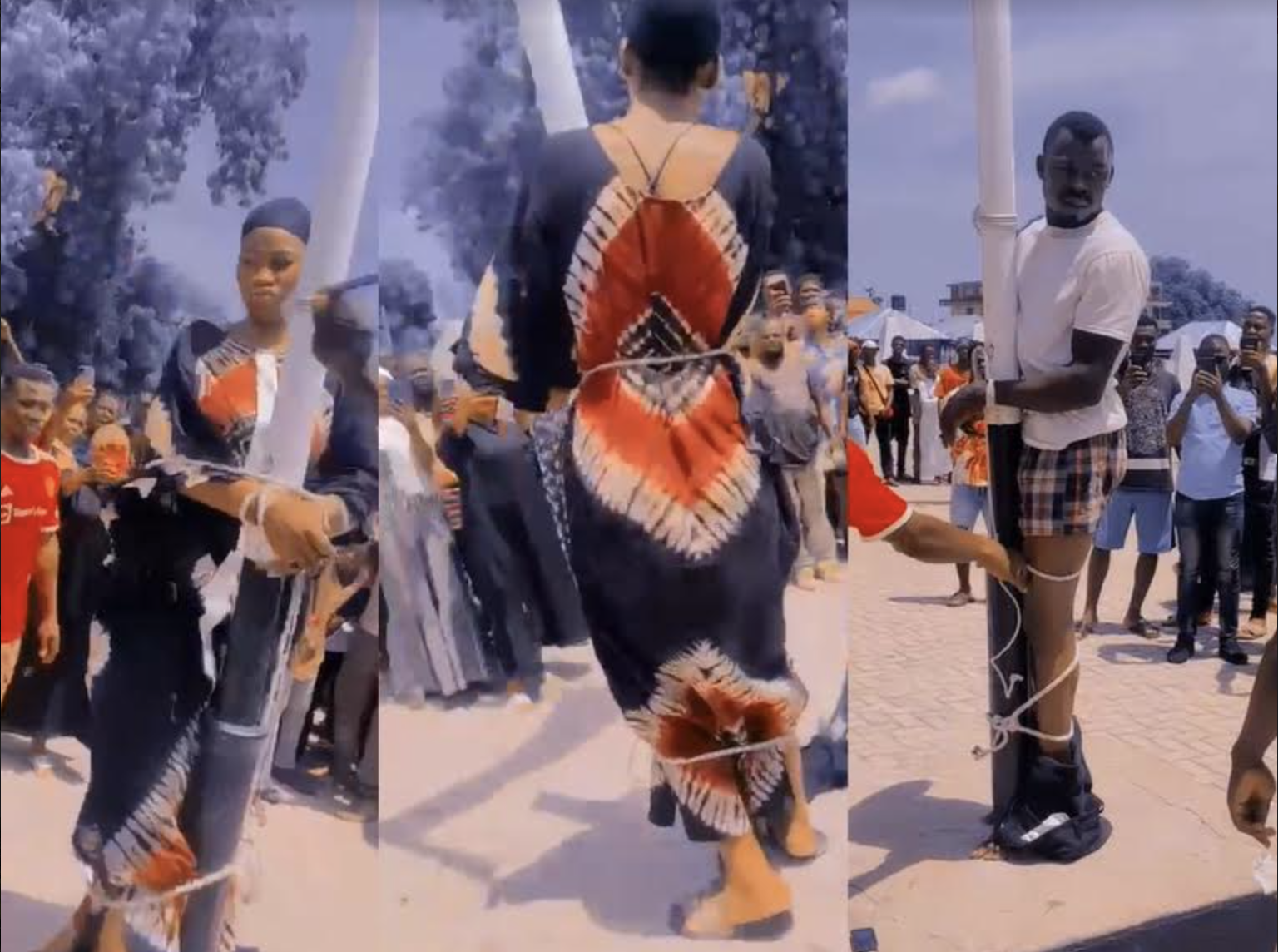 Ghanian couple being held by mob because they recorded themselves having sex. *Photo supplied

Lovebirds who allegedly filmed their sexual intercourse, in Wa, in the Upper West Region of Ghana were tied to a pole at the forecourt of the Wa Naa’s (Wa Chief) Palace and flogged. The lovers, a 22-year-old tricycle driver and his 18-year-old girlfriend, who is a ticket seller, were allegedly caught on video having sex.A number of youth in the community dragged the lovers to the Wa Naa’s palace on Tuesday, 31 May 2022, to report them.

The recording of them having sexual relations has gone viral. According to the community, it was wrong for them to have filmed their sexual act. They were therefore punished for tarnishing the reputation of the town and for engaging in an act that is frowned upon by Islam.

Reports indicate that the duo were arrested by some young men in the town and taken to the Palace. However, upon their arrival at the Palace, the Wa Naa was absent. The young men in a company with some sub Chiefs, instead of waiting on the Paramount Chief, decided to take the matter into their own hands and delivered a punishment they deemed fit.

In the flogging video that has also gone viral, the couple was seen tied to a pole at the forecourt of the Palace and being whipped, while people looked on.

Two men were seen beating the young woman first. Later, the man was flogged in a similar fashion.
In a related report, the community had earlier resolved to deal with people who are caught in similar situations.

This was after a young woman advertised that she was a commercial sex worker. In the video, she reportedly stated that she was available for hookups with interested parties.

The community members who were not pleased with the advertisement, informed the elders. The report indicated that the elders resolved to take action when necessary.

This was meant to deter others from behaving in the same way.

Meanwhile a leading member of the governing New Patriotic Party (NPP) Gabby Otchere-Darko has described the flogging of the two lovers, as “insane.”

“Two consenting adults decide to film themselves having sex, apparently. The tape goes viral and some in the community believe they have a responsibility to flog the couple publicly? Insane!” he tweeted on 1 June 2022.

The Vice-Chairperson of the Defence and Interior Committee in the Parliament of Ghana, Ophelia Mensah, has also condemned the flogging.

According to her, such acts by the people of Wa is “not pleasant. It is an abuse of their rights and I know some of the human rights advocates will take care of it.”

In an interview with SheHUB.tv, she asks the irate youth to refrain from violence and allow the Police to do their work.

“I know the Police will conduct an in-depth investigation into that. We trust our security services to do that and then they will come out with the perpetrators,” she says.

Concurrently, the Ghana Bar Association (GBA) has said the flogging of the two young persons, as captured in a video, is humiliating, dehumanising, demeaning and degrading.

The GBA indicates it also amounts to the violation of their fundamental human rights, and an attack on their persons.
It adds, “The flogging of the young persons is antiquated, backward, barbaric and abominable, and the GBA condemns the same in no uncertain terms.

“The GBA is therefore calling on the relevant security agencies to arrest all persons involved in the physical abuse of the two young persons, investigate the incident and ensure that the perpetrators are prosecuted in accordance with law.

“The GBA takes this opportunity to advise all citizens and all persons living in Ghana to desist from taking the law into their own hands by meting out punishments to people they suspect to have contravened the law or of having broken any moral codes of any community.

“The GBA urges all Ghanaians and persons living in Ghana to respect the constitutionally guaranteed and fundamental human rights and freedoms of all persons as every individual ‘s right ends where that of another begins. The GBA’s Women and Minors Rights Committee has been directed to take up this matter, by closely monitoring the same and offering the necessary and required legal assistance to the unfortunate victims of the lawless and barbaric act.”

Also, Amnesty International Ghana has called for sanctions against persons involved in the flogging of two persons in the Upper West Region over a leaked sex tape, as it says it believes the physical assault on the two was not justified.

“We strongly call on the Inspector General of Police to use the images in the video to trace, arrest and prosecute all those who approved, condoned and participated in the cruel act in clear violation of the fundamental rights of the two people to serve as a deterrent to others who may consider such acts in future,” it said in a statement. “We in Amnesty condemn the flogging of the two adults since this is a clear sign of mob injustice, jungle-justice and demeaning of the dignity of the two people contrary to the laws of Ghana. Anyone who engages in such an act must be punished. These acts, if not checked, go to tarnish the human rights records of the country – Ghana.”

The Wa circuit court, presided over by His Honour Jonathan Avogo, has granted bail to the three people suspected to have been involved in the flogging of the two lovers.

The court also ordered the release of 13 others who were alleged to be among some rampaging youth group that besieged the Upper West Regional Police Headquarters after they were arrested for their engagement in the flogging.

The mob besieged the Wa Police Station on Wednesday evening attempting to force the release of three suspects who were in police custody. The youth, numbering over 300, pelted stones and burnt tyres in protest. The situation led to the arrest of some 18 persons.

Thirteen were linked to the disturbances after screenings (interrogations)  was presented to the circuit court, but were released.

The release of the suspects has brought uneasy calm to Wa in the Upper West Region of the country.

“With regard to the rioters, after profiling them, the number reduced to 13. They were put before the court, and they were granted bail with sureties and a sum of GH¢3,000,” according to ASP Reynolds Manteaw, Upper West Regional Crime Officer.

The three suspects initially arrested have been identified as Sidiki Osman, Bushiran Khigir and Issahaku Mahama.