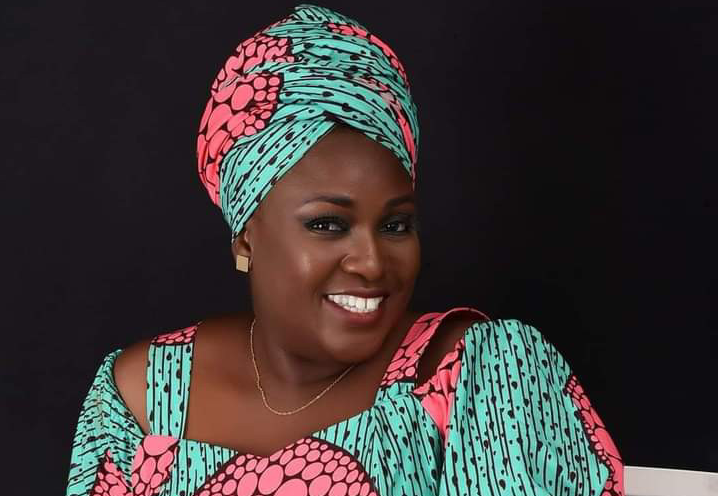 For a woman who rose to the heights of being the wife of a diplomat, she never expected to return to the streets to sell ‘koko’ (porridge). But life, as unpredictable as it can be, took a different turn and things began to crumble for Felicia Edem Attipoe. Refusing to stay down, she then went on to become Ghana’s first female aircraft marshaller.

She shares with SheHub.tv an emotional story of how she fell from “grace to grass.”
Felicia breaks down in tears as she recounts how she tasted “Heaven on Earth” in her marriage to an ambassador but her life changed completely after the marriage hit the rocks.
It all began at the age of 28 after she had secured a job at the Kotoka International Airport.
“I met this man who gave me Heaven on Earth. He was a politician and we got married when I was 28 years old and that was the best thing that ever happened. He became an ambassador and he exposed me to riches. I didn’t know which car I would use. Today you see me in one car, the next day I’m in another one.

“I had a seamstress who sewed for me alone, all it took me was a phone call, and then she would give me something to wear. I had a wardrobe full of jewellery, cloth – you can’t look me in the eyes twice,” she recounts.
Felicia was drowning in riches and royalty.
“I visited countries. I don’t know which country I haven’t been to, apart from hell. I met with queens and kings and dined with them. I sat in a car with a flag and that [indicated] it was me coming because I was a big man’s wife. I received dignitaries – that was my grace.

“I have a diplomatic passport. I come to work today, the next three days, I’m in the US. Next week I’m in the UK. I travelled with the First lady. I’m a madam. I had a cook and a butler. I wore a wig once and I didn’t wear it again. When you see my wardrobe it’s full of Kente (expensive traditional cloth in Ghana), different colours, different kinds of gold jewellery to go with it. I had someone who does the gold jewellery for me, brings them and I buy them. People rushed to me with their items for me to purchase and that was the kind of life I lived,” she recalls.

Then about eight years later, Felicia lost her marriage. She lost the honour and the life of privilege and things began to turn sour.

“The marriage didn’t work. I enjoyed [the luxurious life] but I wasn’t happy. I walked out of the marriage because the emotional abuse was too much and I needed to be alive for my son,” she says.

“My husband was my world. I didn’t plan for the future. Then everything crashed down just like that, within a twinkle of an eye, I lost everything – my home, the cars – I walked away with nothing. I was on the street. I lost the cars and I had to now take a ‘trotro’ (commercial vehicle). When I sit in the trotro I bow down as if someone knows me and would be able to recognise me,” she recalls.

Jobless with no money, she and her son went to live with her cousin.

“I had to come to Ghana because my marriage had broken down so we moved in with my cousin. She had a two-bedroom apartment – she slept in one room and her kids in the other so I had to sleep in the hall with my son.”

Later, Felicia gathered some money and rented an apartment. Then the next thing on her mind was to get a job so she could provide for herself and her son.

“I managed to get a two-bedroom apartment at Tema (an industrial hub in Ghana) and that is where I started life again. It wasn’t easy. I didn’t have my job then so I was trying to plead with them to take me back, but I had to wait for a while. I was very hungry [because] I didn’t plan for a rainy day when I got married and that was a mistake I made. I decided to do business and I decided to sell ‘koko’ [porridge].”
She went back to her former workplace. This time, not as an aviation worker but, a porridge seller.
Going back to her colleagues seemed like a nightmare. Fears of being mocked by her colleagues began to torment her: ““What would I tell them, that I lost my marriage? Ei!”

However, this would not deter her from pursuing her new trade, after all, she needed to survive. So,she faced her fears.

When asked why she chose to sell porridge to survive, Felicia shares: “My friends used to send me to buy porridge for them each time I visited to check on my letter to return to work, then I thought why not prepare the porridge and come and sell to them instead? So I made koko, tom brown, and other breakfast meals to sell to them. They were astonished to see me. Everyone was wondering where my car was. I always told them it was at the workshop. Others teased that a diplomat’s wife selling porridge, but I just carried on.”

Felicia was finding her feet once again with her new trade at the airport but one day, hell broke loose. She breaks down in tears as she recounts the ordeal.

“You know at the airport, you can’t be selling at the premises, so I sometimes gave the men [task force] at post some of the porridge so they would permit me to continue with my trade. And one day, I went to sell there and the task force person in charge seized everything. So I went to my former boss who suggested I take it to the terminal.

“Then another day I got there and our Human Resource (HR) Manager who was a Reverend came in. Right in front of everyone, he humiliated me. He embarrassed me, yelling at me to the point where I broke down and cried. To date, I haven’t been able to forget about it. I just broke down and cried. I was screaming,” she says.

“So I decided to go back to the Head of the HR and told them all that had happened and that was when I was given an assurance of getting my job back.”

Eventually, she got back her job but that was not the end of her woes. Felicia contemplated suicide.
“I got my job back, but I was going through a divorce and going to school at the same time. I had to shuffle between my job, schooling, and taking care of my son. Early in the morning, I prepared the porridge, tom brown, etc. and sold it before I sent my son to school. After that, I went to work from then to school. At one point the classroom was my bedroom. That’s where I slept. I couldn’t learn. Then one day, I suddenly broke down. I was depressed. I just got to the balcony and stripped naked and I was just about to jump because I had had enough of the struggle.

“Then I heard my son calling, ‘Mummy, where are you?’ He approached me and asked why I wasn’t in anything, then I told him I was just taking in fresh air. Then he asked me to come inside and sleep. It was terrible,” she says.

“There were days I stayed deep in the night at the beach because I was hoping that Madame Water [the sea goddess/a mermaid] would just come and disappear with me and end it all but that never happened.”

One day, a confrontation with her son changed the trajectory of her life.
Felicia recalls: “I was depressed, I had suicidal thoughts but what gave me the strength to go on was my child and I felt that I could do something for myself. One day, he confronted me angrily and started blaming me for everything and saying all sorts of things to me. So I sat him down and [asked him] do you prefer that you go to school one day and your friends laugh at you that your mother is mad, or do you prefer you be in this state and I work so hard for us to be comfortable? Tell me which one you prefer and I would gladly give it to you. You know, he chose the latter and that was what gave me the strength that from now on, we are going to make it.

“I changed my mind and then things started changing. We started life again. We started making ourselves happy. Sometimes when I get money, we would go and buy chicken and enjoy ourselves. We took a walk to the beach and went and swam. Then I started having a life.
This was followed by a desire to venture into politics.

“Then I decided to venture into politics, after all, I was married to a politician. Then it started and we were happy. My 40th birthday I bought myself a rickety car. I went for a loan and bought chairs, and a TV set just to make sure my son was happy. I realized that I had to make myself, my son, and everyone around me happy. Life got better. At one point, I got the chance to travel and shop for my child and life started getting better. So I realized it was me and not the problems. Now I have an NGO, I’m doing politics, I’m empowering women and you know I’m the first female aircraft marshaller.

“I’m back stronger and better,” she says with a smile.

Felicia is now an aircraft marshaller at the Ghana Airports Company Limited with over 21 years’ experience in the aviation industry. She was the former women organiser for the Tema West Constituency in the Greater Accra Region for the governing New Patriotic Party (NPP) and the 2022 Greater Accra Regional Women’s Organizer Candidate during the regional elections. She’s an organist and a philanthropist touching lives through in her own way.