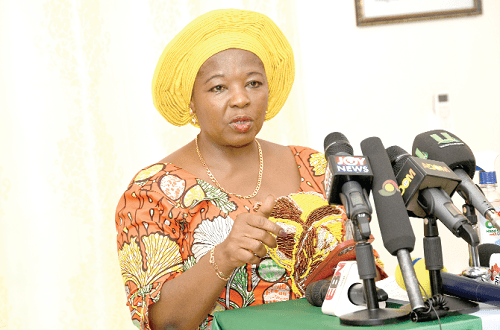 The embattled Chairperson of the Convention People’s Party (CPP), one of the popular political parties in Ghana, Ms Akosua Frimpomaa Sarpong Kumankumah has criticised attempts by the party’s central committee to remove her from office.

According to her, she was legitimately elected and sworn-in as the chairperson of the party.The Committee argued that the current chairperson is not qualified for the position she occupies, as she gained 43% of the total votes cast in their chairmanship elections of August, 2020.

In a statement made available to SheHUB.tv, the Central Committee resolved to conduct a run-off election between Akosua Frimpomaa Sarpong- Kumankumah and the first runner-up, Comrade Hajia Hamdatu Ibrahim.

Ms Kumankumah explains that calls for her to step aside are needless, given that she legitimately won the election based on the majority of votes.

“As the Council of Elders said, I did not elect myself. I did not swear-in myself. They decided to use a simple majority which I got more than 240 to the next person and I won in ten regions. I was elected and properly sworn in and I have been in this position for almost two years,” she tells SheHUB.tv in an interview.

According to Ms Kumankumah the committee must resort to the right procedures in getting their grievances addressed if they felt the processes leading to her election were illegal.

Meanwhile, the CPP Council of Elders has condemned the Committee’s attempts to remove Ms Kumankumah from office.

“The actions of the Nana Yaa Akyempim Jantuah led group constitute an affront to the dignity of the court. We, the Council of Elders of CPP, do not recognise the said unlawful meeting held at the UDS guest house,” the Council hints in a statement.

A statement issued by the General Secretary, Nana Yaa Akempem Jantuah, said: “The Central Committee of the Party (CC) resolved that the breach of Article 93 (e) of the party constitution can only be rectified by carrying out a mandatory run-off between the two candidates who obtained the highest number of votes to select a winner as prescribed by Article 93 (f) of the party’s constitution”.

Consequently, the Central Committee explains that it has unanimously decided to “set aside Comrade Akosua Frimpomaa Sarpong Kumankumah as the chairperson and leader of the party as she did not make the mandatory threshold of 50% or more of the total valid votes cast, and, thus, was sworn in in error and in clear breach of the party’s constitution”.