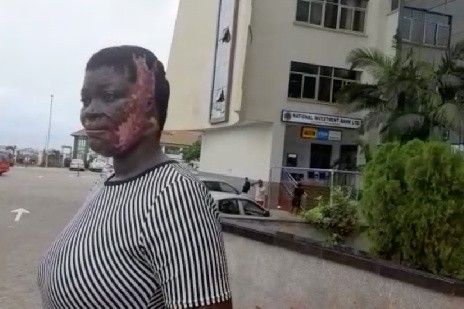 Burn victim Grace Amezando shows her injuries incurred after having battery acid poured onto her by her then-partner. *Photo supplied

An Accra High Court in Ghana has sentenced Bright Boso, a commercial driver, to 10 years in prison for pouring acid on his girlfriend.The court was presided over by Justice Lydia Osei Marfo.

Boso plead not guilty to the charge of causing harm, but was found guilty after a full trial.

The Court, as part of its judgment, observed that the victim, Grace Amezando, as a result of the acid attack, suffered serious injuries and requires an urgent surgical procedure in order to save her eyesight. The Judge further appealed with civil society, philanthropists and corporate organisations to help fund the surgery that could save her eye.

Prior to being sentenced, the convict asked the court to pardon him to enable him take care of his children.

“I am pleading with the Court to forgive me because if convicted there will be nobody to take care of the kids and the victim.”

The brief facts of the case presented to the court by Selasie Kuwornu, a Senior State Attorney, explains that, the victim Grace Amezando is a 24-year-old woman who used to be in a romantic relationship with the accused Bright Boso, a commercial driver.

The prosecutor said the victim cohabited with the accused in a kiosk on an undeveloped land at Christian Village a suburb of Accra, and they have two children.

According to the prosecution, sometime in December 2020, Bright accused the victim of cheating on him with [someone] who lived in their neighbourhood.

According to the prosecution, she joined a bus heading towards Ashongman Estate, a popular Estate near Christian Village all in the Greater Accra Region of Ghana, but the accused followed her by joining the same bus.

“She alighted at the Ashongman Estate bus stop and the accused did same,” the prosecutor tells the court.

The accused, according to the prosecution, then verbally abused her in public and told her that she was cheating on him because she was beautiful.

He then threatened her that she would soon look like an old woman.

“On May 13, 2021, the accused went to work. He returned sometime after midnight…He entered their kiosk, poured an acidic liquid on the victim who was sleeping at the time and stepped out again.

“A few minutes after he had stepped out, the victim started feeling burning sensations on her skin and pain in her eye,” the prosecutor notes.

The victim, according to the prosecutor says, ran out of the kiosk for help and she was rushed to the hospital and eventually referred to the Plastic Surgery and Burns Centre at the Korle-Bu Teaching Hospital in Accra for treatment.

“She suffered an injury to the eye and burns on her face, chest, breasts and [both] arms.

“Upon his arrest, the accused admitted the offence and narrated how after a repair work on the battery of his vehicle, he poured some of the acid taken out of his battery and stored in a container,” the State prosecutor adds.