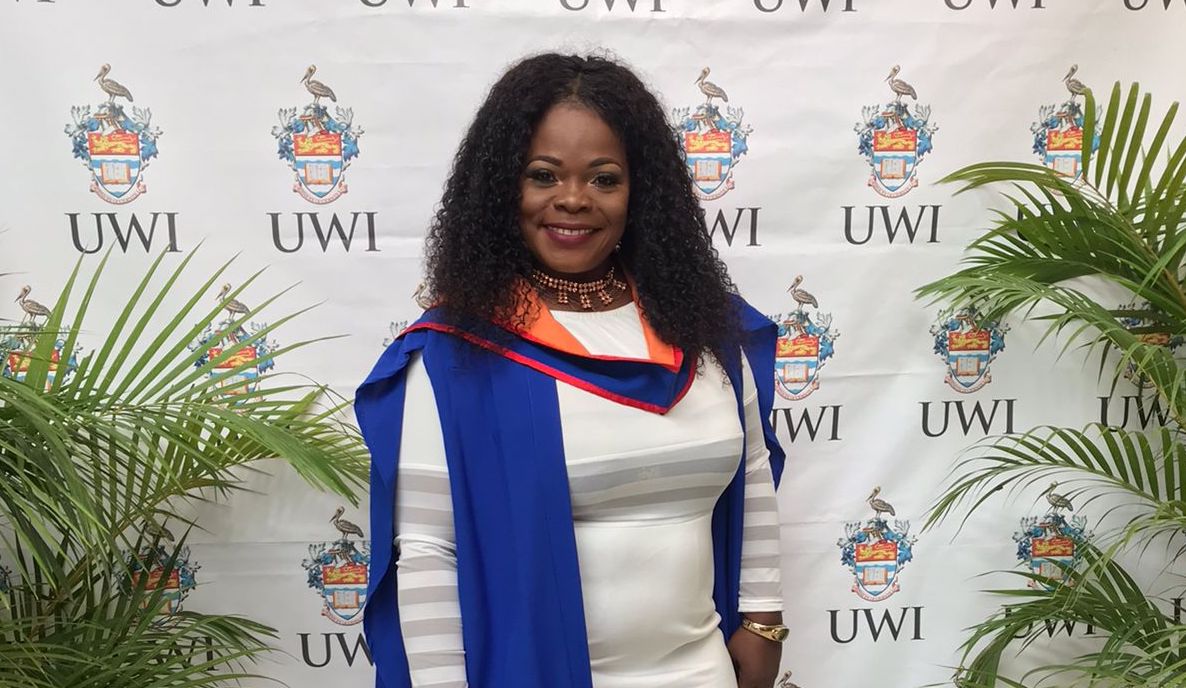 The last two years has been nothing short of formidable for many Caribbean women, who have been thrust into ‘superwoman’ mode working from home; working in, and around the home. The Covid-19 pandemic has brought with it stressful times.  But for Jamaican, Dian Vidal Briggs, the last two years have been phenomenally rewarding. Dian, who wears a plethora of hats including that of Principal, Justice of the Peace, Restorative Justice Facilitator, Women’s Ministry Director, and Mother, is celebrating her momentous achievement of graduating from university alongside her son.Dian, and her son 23-year-old son, Kaveed Brown, have been awarded their degrees from the University of the West Indies (UWI), Mona, recently. Dian earned a MSc. In Educational Leadership, while Kaveed attained a BSc in Terrestrial Ecology with a minor in Cultural Studies. Both are looking forward to graduation, in the coming weeks.

Dian is the principal of the Mount Pleasant Primary and Infant School, in Portland, Jamaica. For Dian, being awarded this master’s degree, is another step towards becoming the transformational leader she aspires to be.

Recently she sat with Kayon Hutchinson  and shares her excitement regarding her and her son’s achievements.

What are your most profound feelings, in graduating from University of the West Indies along with your son? It is an ecstatic, emotional and exhilarating feeling knowing that both of us have reached another milestone in our educational journey. In fact, we have been celebrating for quite a while now.

Describe your relationship with your son. Kaveed and I have a unique and amicable relationship. He takes counsel well, however, he is not afraid to communicate his desires, even when they go contrary to my ‘expectations’. Kaveed is a quite well-mannered child. We share quite a few things together; however, he can be secretive at times.

Was this ‘duo’ accomplishment something that you planned, or was it a matter of chance? No it was not planned. Actually, I wanted to do my studies about 10 years ago, when I was accepted by the University of the West Indies Mona. Kaveed would have been just starting high school. However, that was the same year I found out that my mother (Daisy Williams ) was ill. It was not long before the discovery of her illness, that she passed away. Her death sent me in depression, so I had to defer. So, every year I kept putting it off as other ‘things’ came up. Finally, I decided I needed to stop procrastinating; it was now or never. I needed to get on with becoming the extraordinary woman I envisioned.

Kaveed on the other hand, being a typical teenager, was uncertain of his career choice. He started at the College of Agriculture, Science and Education (CASE) however, he later told me he wanted to change to the Edna Manley School of Visual and Performing Arts, to study Drama. I sat with him, and we spoke about the pros and cons of his choices, and how it may impact his future. Kaveed, had also applied to the UWI, as he, like his mother, loved having choices. Finally, he opted to take up the offer at UWI, where he could also minor in some form of acting. So, having started at CASE, he was exempted from some courses, and so this shortened his studies; hence both of us finishing at the same time.

During your studies, did you encounter any challenges that made you feel like calling it quits? Challenges is an understatement. Being a principal, a wife, mother of two sons, a facilitator for Restorative Justice, Justice of Peace, and a Women’s Ministry Director, all of which require a different attention; time management was a challenge. I also had financial struggles, securing tuition fees for both my studies and my son’s; and having to deal with academic facilitators, who did not seem to care if you passed or failed. I have had days when I had no money to put gas in my car to go to work. I have had banks representatives calling me to remind me of my credit card payments. I had teachers, parents, and students needing me to solve issues brought on by the pandemic, which also created additional stress for me.

I remembered writing my final paper. I was sick- I think I had contracted the Covid-19 virus. I was out for 14 days, I had to double the effort to get back on track with work and school. I also remembered not sleeping for two consecutive days. I am never one to quit though, so as the challenges came, I doubled my efforts to stay on course.

We are living through a pandemic, how did you deal with managing a school, studying, and supporting your son in his studies, during your academic tenure? The pandemic was rewarding in [some ways].  Kaveed was living on campus before the pandemic forced schools to move to remote learning here in Jamaica. So, I had to be paying a huge sum of money for boarding, in addition to providing money for food and travelling. So, in March 2020, when he had to leave campus, I was financially relieved. He was now at home, where I could wake him up for his classes, as well as keep his company when he had to study late nights. I also helped him navigate the online space, since it was new to him. Eventually, when I started studying, the relationship became reciprocal, with both of us supporting each other.

We know the struggles young men face with regards to marginalisation. What strategies did you employ to keep your son focused and grounded in his studies? I nurtured Kaveed from an early age to value education. I started him in the formal school system at just 21 months old. Kaveed knew from the onset that education is a priority, so it did not take a lot of effort to keep him grounded in university. As a schoolteacher [and then] principal, I had all the tools and skills needed to guide him academically. Kaveed performed exceptionally well throughout primary and high school. He also has a lot of mentors, like his aunts and uncles.

Who, or what can you attribute to your resilience and dedication? My mother. Growing up, I remember her being the epitome of resilience and strength. She took care of six of us single-handedly. I am sure she must be happy, to see how her children have remained rooted in what was instilled in us… hard work, dedication, and resilience. She was and will always be my biggest motivator. I remembered when my mother lost her job, she went to sell sweets at a school gate, to ensure we were taken care of. Even when I got accepted at college to study for my diploma, I had no idea where the money would come from to facilitate my studies. However, when I showed her the acceptance letter she hugged me and said, “Lucky thing I have a partner draw to get” (a type of savings plan) and the rest was history. God has been good.

What advice would you have to give to working women like yourself, who want to study, but say that they just cannot find the time to do so? Never say you can’t. Just put one step forward and believe, do the hard work and you will achieve. Everything starts with taking the first step!

A fierce and fearless woman, Dian has defied the odds, and has pushed herself to greatness. She has shown us, that out of every negative situation, opportunities can flourish, be nurtured, and blossom into something amazing!

Your Health, Your Way: Holiday Self Care